Two seasons on from their relegation from the Premier League in 2014/15, Sean Dyche and Burnley are sitting comfortably in 12th place in the league, 10 points off the relegation zone. A lot of the team’s success in the league this season can be put down to their home form.

Burnley have managed to turn Turf Moor into a bit of a fortress. They have collected 29 points out of 14 games at home, a better tally than that of Liverpool (27), Manchester City (25), and Manchester United (24).

In fact, before their draw against Chelsea, Burnley had won 5 league games on the bounce at home, and 7 games on the bounce in all competitions. Their shock defeat to Lincoln City was their first defeat at home since they lost 2-1 to Manchester City in November.

This is especially important as their away form has been dreadful, collecting just 1 point from their 11 games at home, scoring just 5 goals and conceding 24. That is the worst away form in the Premier League.

Burnley look a completely different team when compared to the team that went down 2 years ago. In fact, over the course of 38 games that season, Burnley collected just 19 points at home and 14 away from home. Not only that but, when comparing the starting XI that Burnley put out against Chelsea in their last game with the one they put out against Chelsea at Turf Moor in 2014, there are just 2 players that played both games (Tom Heaton and Ben Mee). 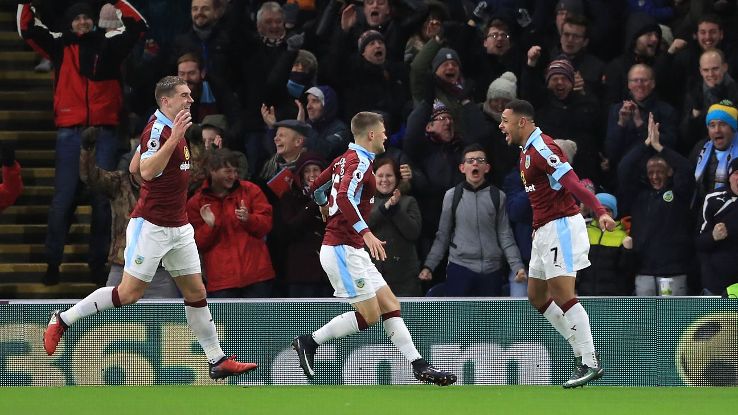 Burnley have taken more points at home than Liverpool, Manchester City and Manchester United this season.

Since then, Burnley have broken their own transfer record twice over the past 12 months when they signed Jeff Hendrick for £12.5m and then Robbie Brady for £13m. Sean Dyche, in doing so, has sought to grow his squad and become more and more of a Premier League calibre team.

Not only has Burnley’s home form been a revelation this year, but they have looked far more of a complete team this season when compared to 2014. They have already outscored that campaign with 27 goals compared to 14 in the entire 2014/15 campaign. On top of that, Andre Gray has scored 6 goals so far this campaign, just 2 less than Danny Ings managed to score at this point that campaign.

Sean Dyche deserves a lot of credit for how Burnley have progressed over the past 2 years, as he has managed to identify what needed to be improved and how to improve the team to help it become a team that could not just survive in the Premier League, but thrive.

Burnley as a football club also deserve a lot of praise for how they have stuck with Sean Dyche despite that disappointing 2014/15 season. That decision is paying dividends with the current campaign. After all, Burnley are just 3 points off their 2014/15 tally already.

All of this is sure to have made the fact that Burnley crashed out of the FA Cup at home to Lincoln City all the more disappointing for the fanbase, as they are all but safe from relegation and had a chance to really push for a Wembley appearance in the cup.

Burnley are sure to remain in the Premier League until at least May of 2018. With Sean Dyche at helm and a tight group of capable players, they have become a team to be reckoned with at Turf Moor. As for how far they can go in the years to come, with a presence in England’s top flight enabling Sean Dyche to continue to build his squad, Burnley can become the next Stoke City as a Premier League ever-present.